How do single-celled algae, which are responsible for almost half of Earth’s photosynthesis, sense their environment to respond appropriately to the lethal threat of predation? The increasing frequency of toxic algal blooms, with worldwide consequences to human health, fisheries, and marine ecosystem functioning, has garnered much attention in recent years, but it has remained unclear how algal toxicity is regulated. Chemical cues that induce resistance against grazers in the marine plankton have presented chemists with daunting technical challenges hindering our understanding of predator-prey dynamics. In particular, chemical ecologists have struggled to characterize compounds that are: 1) produced in low yields by tiny organisms that are not readily cultured; 2) effective as blends of multiple molecules in specific ratios; 3) released into seawater (not just a vast medium, but a salty one); 4) polar (compounding the problem of the salty medium); 5) detected using a bioassay requiring days of phytoplankton exposure followed by complex toxin analysis; and 6) unstable.

Thankfully, chemical cues that cause algae to up-regulate their toxicity threw just 4 of these 6 challenges at our interdisciplinary group of chemists and biologists. In an ongoing collaboration with scientists at Gothenburg University in Sweden, we have found that substantial (20×) induction of algal toxicity occurs when algae are exposed to a family of previously unknown chemical cues from predatory zooplankton (copepods). This represents the first discovery of chemical cues mediating interactions between marine zooplankton and their prey.

Currently, we are examining how the metabolism of the algal prey changes in response to the predatory cues, paying particular attention to regulation of potential toxin precursors. We are also investigating if algae might use other cues to assess their risk of being eaten by a predator and subsequently increase their resistance to predators. Tangentially, we are exploring what cues predatory copepods might use to distinguish more toxic algae. 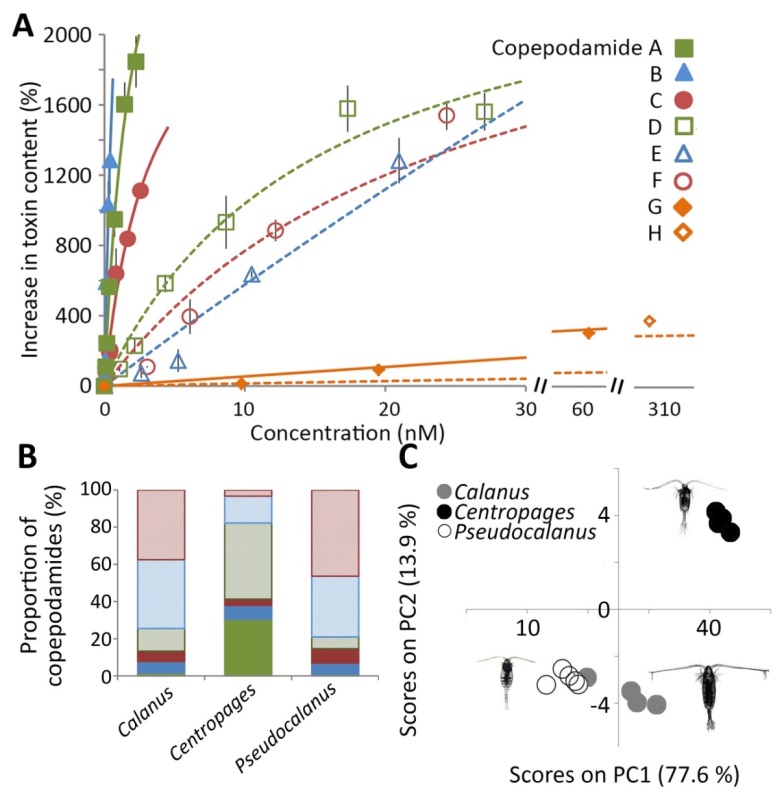